Thought Of The Week

The Euros finally hit our TV screens on 11th June, after a year’s delay because of the global...

It is widely reported across the industry that TV viewing figures are in the decline, with the latest full year figures for 2019 indicating a 19% YoY decline in CH equivalent impacts. Current circumstances with Covid-19 and the lockdown measures however have led to a resurgence of TV viewership. Total CH equivalent impacts are up 26% when comparing the 4 weeks leading up to the UK lockdown on the 23rd March and 4 weeks from that date to the 19th April.

1. TV will continue to remain the #1 destination for children’s ad spend for as long as it maintains its advantage in:

Despite all of the reported declines in viewing, 89% of all toys & games advertising spend in 2019 was invested into TV, showcasing the continued importance of this channel to a media plan in this market. This status is justified by 4 key areas of success that TV continuously outperforms other media channel in:

Cost: As a mass awareness media channel, TV remains by far the most cost efficient route to reach kids. When comparing to other AV channels such as YouTube and VoD, TV can be up to 5x more cost efficient particularly between the months of January-August. In more immediate and relevant circumstances, CPT’s during the month of May have dropped to as low as £1 as a result of sales house’s attempts to keep demand high during this period of lockdown. 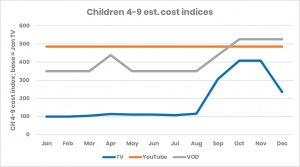 Reach: It is no secret that children’s weekly viewing time for linear TV is declining YoY, with latest figures from 2019 suggesting that 8 hours and 23 minutes are being viewed on average (vs. 18 hours and 11 minutes in 2010). This however may not be as worrying as initially assumed when looking at the total reported number of children in the UK as of 2019. The total children’s universe (audience size) has seen a 15% increase since 2010, from 4,171,000 to 4,816,000 meaning more children than ever are watching linear TV. Free to air channels have become increasingly important within a children’s channel mix, as we see the likes of CITV and the Sony channels taking a larger proportion of the share of commercial impacts. This is following reduced accessibility to the likes of Viacom, Turner and Disney channels across the Sky top box.

Return on investment: A number of studies have been conducted, devoted to understanding which media channel returns the best bang for your buck. Thinkbox’s “Profit Ability” study in 2017 concluded that TV was far superior vs. other channels in delivering this, with TV generating 71% of all advertising related profit across all of the campaigns included in the report. When looking specifically at retail goods, 96% of all TV campaigns delivered a positive ROI. TV can also improve the effectiveness of other media channels by up to 100% (“Payback 4” by Ebiquity – 2014). Particularly for the likes of radio, OOH and press, TV was key in improving the performance of other media’s when run in conjunction.

Brand Safety: With GDPR-K regulations coming into play on the 25th May 2018, huge pressure has been put on a number of media channels to ensure brand safety for advertisers. Due to the processes in place and the level of control broadcasters have over content and advertising, TV remains the most brand safe channel. With this control comes a higher quality of programming and advertising. Data from the latest KATS (Kids and the Screen) wave from Giraffe Insights showcases that this has a positive effect on the ad recall of children, with TV taking the largest proportion with 53% (online =30%/SVOD=5%).

2. Reappraise linear TV efforts and consider news ways of achieving stand out in a cluttered market, whilst maximising your value:

With demand for airtime falling at a slower rate than the supply more advertising spots are required to achieve planned benchmarks, causing the toys & games TV marketplace to become a cluttered landscape. This means that driving efficiencies and creativity is more important than ever before. A simple way to plan a more efficient TV campaign is by taking advantage of combination campaigns, with 30” combinations saving 35% vs. a 20” and 10” TVC run separately.

There are a number of different creative avenues that can be explored to stand out from the crowd, from more commonly known formats such as sponsorships idents to more guerrilla like formats such as break takeovers and airtime roadblocks. These formats can be a great way to find a key viewing time to allow your brand to shout the loudest amongst the competition.

3. Extend video campaigns outside of linear onto YouTube and VOD platforms, however ensure that linear TV remains the foundation in order to benefit from its multiplier effect.

With children migrating away from TV, it is important we understand where they are moving to. With insights from KATS data, GM can see that VOD and YouTube play an integral part in the typical child’s viewing diary. Learning from the current viewing habits of children, these platforms contribute massively to form a combined AV strategy therefore it becomes important to understand the role they play in increasing the reach. As a consequence Generation Media have developed “Jigsaw”, which is a tool to accurately understand the incremental coverage that VOD and YouTube provide when run in combination.  Get in touch for a virtual coffee today to find out how you can maximise the impact of your TV advertising.