GM Thought of the Week: KidsCon19, bigger and better in its 2nd year, raising over £2,500 for the Toy Trust… 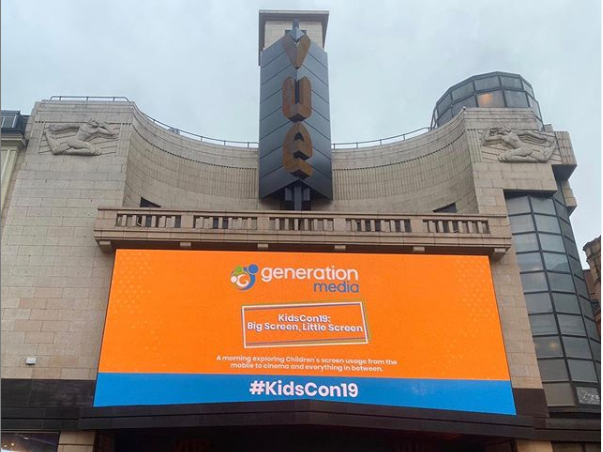 On the morning of the 28th November, Generation Media took over Leicester Square’s Big Screen at VUE cinemas.  The morning was designed to appeal to the audience of marketing professionals from across a host of industry’s looking to communicate effectively with Children through a multi screen strategy, from mobile to cinema and everything in between it was all covered.

Our very own CEO Dean Weller kicked us off what was set to be a brilliant day with a quote that rang true across the presentations to follow – ‘When the winds of change blow, some people build walls and others build windmills’.

This was followed by a range of bite size presentations into kid’s media consumption from a number of different standpoints, but with one very strong message – While everything changes, nothing changes.

Giraffe Insights Maxine Fox, Sadie Buckingham and Jon Norris then followed up with the latest data from their proprietary “Kids and The Screen” research and premiered “Little Voices: Big Impact”.

The first half was rounded up by a fabulous panel of influencers who answered the audience’s questions about their content, where is the best to post, the Tik Tok phenomenon and how to best use content across the social channels.

The second half of the morning featured Clive Green from Generation Media, discussing the ‘new’ consumer path to purchase.  Paul Nunn from Super Awesome shared his experience from the world of Apps, whilst Stephen Woodford from the Advertising Association and Rachel Barber-Mack from Media Smart talked about trust and education in advertising.

Alex Taylor-Smith from Generation Media presented the similarities and nuances across the Globe and Loveday Weller, Generation Media showcased the company’s work in the Content and Distribution space.

The morning was wrapped up by Antonio Garcia and Michael Pollard from DCM who shared the exciting family release line up for 2020.

Generation Media would like to extend a big thank you to all the attendees, contributors, partners and supporters of the event.  They raised over £2,500 in admission sales for BTHA Toy Trust and have set the bar high for next years event.